Project goals and timeline – The iviCivi Project
Skip to content 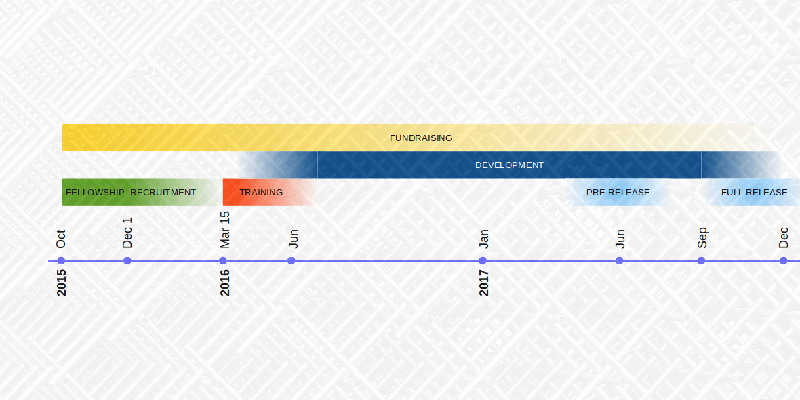 Special Note:Due to delays with some promotional materials, early dates have been shifted by one or two months. In any case, the timeline remains flexible, dependent upon how rapidly resources become available.

The goals for the iviCivi Project are twofold:

1) locate and enlist the specialized skills needed to complete the project, and
2) build funding capital for the project by soliciting millions of small gift contributions.

Open call for applications from qualified fellows will extend until December 1, 2015 at least mid-January, 2016.

December 1, 2015 January 15, 2016 — Closing date (earliest possible) for applicants to the fellowship program. This date may be extended to provide more time to source qualified applicants and/or to raise funds to sustain them.

March 15, 2016 — Start date (prospective) for fellows. This will mark the beginning of a two-week immersion training program.

June 2016 —  Fellows will rotate into the project when their particular skills are needed for that particular developmental stage. When not physically present on-site, fellows will remain involved by telecommuting remotely for the project’s duration.

January 2017 — Initial release of the iviCivi App for review and testing by the extended community, drawn largely from project supporters.

September 2017 — Begin to transition some of the fellows from a development team to a sustaining department.

December 2017 — Conclude and release a full version of the iviCivi App. Finalize the transition of a core group of fellow’s to an on-going support team.